So, you’re lounging on the couch and binging on your favorite TV series as you enjoy a sandwich. Suddenly, your dog is right there begging for a bite.

But wait – can dogs eat bread crust? Are there health benefits? Or are there dangers?

Find out what bread crust is and if it has any nutritional benefits. Is safe for your dog to eat?

We also have a dog bread treat recipe and an alternative if your dog happens to be allergic to wheat!

What is Bread Crust – Does It Have Any Health Benefits?

The bread crust is a part of the bread that is formed from surface dough during the process of baking. It is usually hardened and browned from the intense heat at the bread surface.

Most types of bread have harder crusts that are more complexly flavored than the rest of the bread.

While some would rather remove the bread crust before eating a sandwich, you might want to save it as it contains a powerhouse of antioxidants.

According to the American Chemical Society’s Journal of Agricultural and Food Chemistry, bread crust not only contains antioxidants that can combat cancer, but it is also rich in fiber that can help avoid colon cancer.

They experimented with an everyday sourdough bread mixture and analyzed the bread crust and crumbs compared to the paler inside bread.

It was discovered that pronyl-lysine, an antioxidant, was eight times more plentiful in the bread crust than in the other components of the bread. And it was not at all present in the original flour.

Pronyl-lysine is effective at raising the levels of phase II enzymes which are enzymes that can prevent cancer. It’s more prevalent when the bread is broken down into smaller pieces.

Even though this substance is produced by both yeast-based and yeast-free bread, darker breads, like wheat and pumpernickel, contain higher levels of antioxidants than lighter types of bread like white.

But does that mean you have to brown your bread for more nutrients? No, overly browning can lower the level of antioxidants, and it may even play a part in causing cancer because of the carcinogens in burnt bread.

Is Bread Crust Safe for Dogs?

Bread crust indeed has more health benefits than the regular inside of the bread, but are dogs allowed to enjoy these advantages?

As with other types of bread, the bread crust is not toxic to dogs.

Small amounts of bread crust are okay, as long as your dog does not have a wheat allergy. The key is not to over-indulge them on this food and to not make it a habit since it is still loaded with carbs.

Bread crust is still high in calories and low on nutrients, so don’t depend on it as a whole meal for your dog.

Besides, it’s not going to make your dog full, and too much will lead to weight gain and obesity.

Bread crust might be the safest part of the bread to give to your dog because it usually doesn’t have toxic bread ingredients. Be sure to avoid the following toxic ingredients:

Bread dough should also be kept away from your dog as it can lead to bloating and even alcohol poisoning.

Bloating in dogs has the following symptoms:

As the dough rises in your dog’s stomach, ethanol is being produced and can lead to alcohol poisoning if your dog consumes it.

Alcohol is absorbed into the bloodstream and may cause a drop in their blood sugar, body temperature, and blood pressure.

If you’re the type to bake treats for your dog instead of buying them, this dog bread treat recipe by Best Dog Treat Recipes is worth a try! It has a bigger crust because of its form and it’s a healthy addition for your dog’s coat because of the olive oil.

All you need for this are:

If your dog is diagnosed with grain and gluten allergy, switch to a grain-free or gluten-free diet and stop feeding bread crust to them. 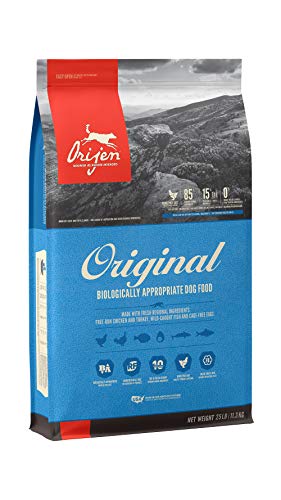 Try ORIJEN Grain-Free Dry Dog Food. With options like beef, original, and seafood to choose from, this dog food delivers a diet that is rich in fresh animal ingredients like meat, organs, cartilage, and bones.

ORIJEN claims to be made of 85% animal ingredients to provide enough nutrients to your dog. It also contains fresh fruits and veggies delivered from their trusted farms and orchards.

Give Bread Crust in Small Quantities!

Unless your dog is allergic to wheat and gluten, then you can give your dog a bite of your bread crust.

It’s the safest part since it is the most well-baked and has more antioxidants than the inside of a plain piece of bread.

Make sure it is just a rare treat for your pup rather than part of their everyday meal. Dogs need a balanced and nutritious diet to keep them healthy and happy.