Puppies and dogs chew on things, and that’s normal. For young dogs, chewing is a way to soothe their gums and the pain that comes with growing teeth.

For older dogs, chewing keeps their jaws strong and teeth clean. It’s also a coping mechanism for anxiety and boredom!

But chewing can be destructive and transform into bad behavior, so it’s your job as a dog parent to teach them how to stop this behavior. One way is by using a homemade dog anti-chew spray.

We share what dog taste deterrents are and how you can make them at home! We also provide you with information on why dogs chew and other ways to stop this behavior.

Before finding solutions to stop your dog from chewing, it helps to know why they’re doing it. There are several reasons why dogs might chew. Here are some of them:

Dogs never chew out of anger. We know how annoying it can be, but it’s important to understand that our furry friends chew inappropriate things simply because they don’t know any better.

In other words, they don’t understand that your favorite shoe​s are any different than their favorite chew toy until you teach them otherwise.

To solve this problem, start by asking these questions:

What are Taste Deterrents 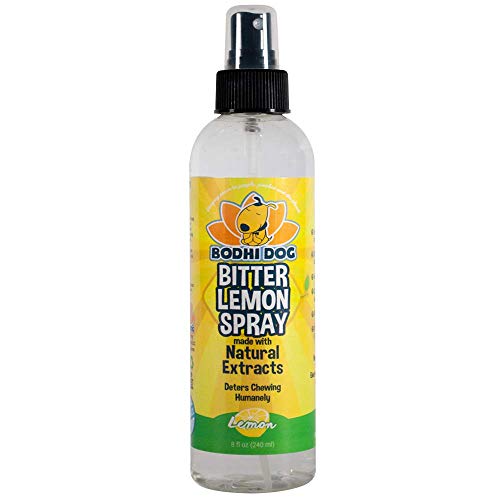 Taste deterrents are substances made to taste bad for dogs. They’re either, hot, spicy, or bitter.  Pet parents can apply taste deterrents to various off-limits objects outdoors and around the house and even to their own hands.

Dogs have taste buds for sweet, salty, sour, and bitter, just like us humans. Our canine friends tend to reject bitter foods, that is why most taste deterrents are bitter.

However, while most dogs act like they’re the worst thing they’ve ever tasted, others seem to like them.

Some taste deterrents can be applied to the dog to avoid them from licking and chewing themselves.

But make sure to consult a vet before applying any product directly on them. Some taste deterrents may sting or irritate the skin!

Although there are many non-toxic taste deterrent sprays for dogs, you might want to consider making your own just to assure the safety of the substance and to save a few bucks. To make an anti-chew spray, you will need to prepare the following:

Have an empty spray bottle with you. It’s recommended that you only repurpose bottles that originally contained non-toxic substances.

But if you’re planning to reuse a bottle that once held commercial cleaner, rinse it thoroughly and wash it out with soap. No traces of substance should remain.

The mixture won’t damage the objects you spray on, so don’t worry. You may also use two cups of lemon juice instead of apple cider if you don’t have it. The lemon juice will also taste tart and discourage your dog from chewing.

Spray on the objects you want your dog to stop chewing. Reapply it every week before the taste fades and your dog goes back to chewing. Be consistent in respraying until they learn to stop doing it without the deterrent.

This anti-chew spray is non-toxic, but you should never spray it on their eyes and skin to prevent them from chewing on themselves.

Skin that has been chewed or licked could be raw or broken and will need to be reviewed by a veterinarian to see if topical antibiotics are required.

Other Ways to Stop Dog Chewing

Aside from using taste deterrents, here are some other ways you can temporarily or permanently stop your dog from gnawing.

Make Your Own Dog Anti-Chew Spray!

Chewing in puppies is normal. They do this because they are teething, in pain, or want to soothe themselves.

However, allowing this behavior can lead to the destruction of your shoes, furniture, and your whole home. It can also lead to other bad behaviors that will be harder to undo.

Fortunately, you can help them overcome this behavior with deterrents like an anti-chew spray. These items are safe substances made to taste bad for dogs. They’re either, hot, spicy, or bitter.

Instead of buying one, you can save some money by making your own homemade dog anti-chew spray to put a stop to your pup’s bad behavior.