Sometimes, we tend to be obsessive about every gesture our dogs make. We like interpreting every behavior as a conversation because we get curious about what they think and feel.

For instance, you might be asking yourself, what does it mean when a dog winks at you?

Winking is an overlooked body language among dogs. It can indicate submission or happiness. Sometimes, it doesn’t mean anything at all.

We share with you whether dogs intentionally wink or not and why your dog winks at you.

You’ll also learn what to do about your dog winking at you if you think it is a problem.

Dogs intentionally wink to send a message to their owner.

Studies show that dogs have evolved to use their eyes to communicate with humans.

It’s been engraved in their genetic makeup through thousands of years of being domesticated.

This means that dogs can wink at us for a variety of reasons.

Why Your Dog Winks at You

Dogs love using facial expressions to communicate with us. So, what does it mean when a dog winks at you?

Your Dog is Happy

Dogs wink at you simply because they feel happy. The happier they are, the more they will wink at you.

Angry dogs would never wink at you or do other playful things.

You might notice that your dog is blinking with one eye while they are actively engaged in play.

For some dogs, it is reciprocal. They see you winking unintentionally, thinking it’s for them. So, they wink back at you!

Every dog owner knows that dogs do things because they crave attention.

Some dogs bring their heads onto your knees when they want to go out. Sometimes, they paw at the main entrance door.

They love doing all of this while winking with puppy eyes at you.

If you know your dog well enough, you’ll know how to interpret the message that they are trying to send you.

Eye contact among dogs is usually a sign of aggression and dominance. But if they keep staring at you, it doesn’t mean they want to fight.

Staring back at your dog can make them wink or look down. This is their way of keeping the peace and breaking the stare.

They understand your position as the leader of the pack, so they express submission this way.

Imitation is the sincerest form of flattery.

Dogs often imitate human behavior such as winking because they see us doing it often.

They see us smiling, making noises, and using our hands to hold things so they copy us.

Even though your dog doesn’t know what it means to smile or wink, they do their best to imitate us because they want to communicate with us through body language.

If you wink too much around your dog, chances are, they will pick up this behavior.

While your dog’s winking behavior might seem cute, it could be a symptom of an underlying health issue.

Canine blepharospasm is an involuntary blinking or spasm of your dog’s eyelids.

Some consider it as an eye twitch, which occurs when some parts of the brain control voluntary muscle function.

Signs include eye twitch, closing one eye repeatedly, and squinting.

Blesphoraspasm in dogs may also be caused by an ailment. Some may be serious medical conditions, while others are nothing to be worried about.

They are Simply Blinking

What you might consider as communication may just be natural blinking.

Dogs blink to cleanse and moisten their eyes.

To check if your dog is just blinking naturally, see if they continue doing it while they are not looking at you.

Why Your Dog Winks with One Eye

Many dog owners get curious and worried about their dog winking only with one eye.

Even though others find it cute, some think it is a sign of a medical condition. But it is likely that your dog is just being submissive.

It only becomes a medical condition when they blink with one eye excessively even when they are not looking at you.

There might be dust, dirt, or discharge on one of their eyes, causing them to blink more than usual.

As mentioned, dogs might wink a lot because of a health condition. This condition is called blepharospasm.

It usually indicates pain or discomfort in the eye. The dog squints or closes one eye continuously while blinking involuntarily like having an eye twitch.

Some causes of blepharospasm in dogs include the following.

Usually, your dog experiences blepharospasm because of a foreign body. It can be dirt, grass, hair, and other objects that get under your dog’s eyelids.

Your dog’s cornea may get irritated, eliciting blepharospasm.

If your dog does not produce enough tears from their tear glands, they might blink a lot.

This condition usually affects both or only one of your dog’s eyes. If the eye is dry, blinking can be excessive even among humans.

This refers to the erosion of the surface of your dog’s cornea due to the rubbing of the eye.

The cornea is the outermost layer of the eye, so it can be a very painful condition for your pooch.

The ulcer forms and results in your dog’s irritation and blepharospasms.

This is like a corneal abscess or microbial keratitis, where an infection forms instead of an ulcer.

Entropion is when the eyelids of your dog roll inwards. This condition is also irritating to the cornea, leading to blepharospasm.

Your dog might want to rub their eyes and feel severe discomfort, so they wink a lot to reduce it.

Blepharitis occurs when the eyelid of your dog gets inflamed.

Don’t confuse it with blepharospasm. Blepharospasm is a symptom of blepharitis.

This means that your dog rapidly blinks or makes eye twitches involuntarily because they have blepharitis.

This issue, on the other hand, involves the middle layer of the eye.

This part of your dog’s eye gets inflamed and results in a very serious eye condition if not addressed right away.

This eye condition is another reason why your dog winks a lot. It is caused by excess fluids that put pressure on your dog’s eyes.

Watery eyes are one symptom of glaucoma. Your dog blinks to remove the excess fluids, and this can lead to blindness if not treated right away.

Can Dogs be Trained to Wink on Command?

If you’ve talked to your vet about your dog’s winking behavior and found out that your dog does not have health concerns, it means they see you as the dominant pack member.

If you like that your dog winks because it’s cute, you might ask if this behavior can be trained.

Dogs can wink on command, but it’s harder than training them to sit or come.

Here are some tips you can try to help train your dog to wink on command.

Investigate What Makes Your Dog Wink

Before teaching your dog, it’s important to investigate what encourages them to wink.

The most common way to make them wink is by gently touching their whiskers on the side of their eye.

But you must make sure that your dog isn’t aggressive!

That means you start by touching their whiskers on one side of their face then give them the “wink” command.

But if it does not work for your dog, try lightly tapping them on the top of the head on the side of their eye.

The downside to this method is their tendency to close both of their eyes instead of winking with only one eye.

Always Give the Command

Every time you try to make your dog wink, don’t just touch their whiskers or tap the side of their eyes. Give verbal commands.

The best command to give is “wink.” Say this word as they are winking, not a few seconds before or after.

Short commands for dogs are effective because long phrases are more difficult for them to understand.

Command words must also be consistent without changes or mix-ups. Everyone in the family must have the same command word so you don’t confuse your dog.

Give Your Dog a Treat

If your dog winks when you touch their whiskers, make sure to reward them right after. 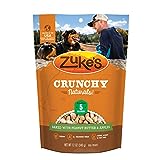 Available in some great tasty flavors, these treats contain protein-rich nutrition for your dog’s health.

The recipes are trail-tested and made with high-quality, wholesome ingredients without corn, wheat, soy, or any artificial colors and flavors.

Continue offering treats as a reward on command for the next 1 or 2 weeks until they associate the winking behavior with rewards.

After one to two weeks, it’s time to stop touching their whiskers or the side of their face. They should associate the word “wink” with blinking an eye at this point.

Start giving them the “wink” command and give them a treat if they follow. If they don’t follow, that’s okay.

Just stay consistent with training. Try repeating the third step for another week or two.

What to Do About Your Dog Winking at You

If you’re concerned about your dog winking, the best way to rule out health concerns is by seeking the advice of your vet.

You need to get expert advice for your dog to deal with medical issues.

If you found that your dog has no medical issue, just let them wink when they want to because it’s harmless and not indicative of bad behavior.

Why Does My Dog Stare and Wink at Me?

If your dog stares and winks at you, they’re doing it to break eye contact and avoid appearing threatening.

Dogs stare at other dogs out of dominance and aggression. But the opposite is true for staring at us.

If your dog stares a lot at you, it could be because they are hungry, craving attention, or want to go outside.

Find out more about why your dog stares at you so you can address their needs.

Why Does My Dog Stare and Wink at the Mirror?

Some dogs also stare and wink at themselves in the mirror because they see the reflection as a potential friend or enemy.

They stare long at their reflection and then wink to break the eye contact.

Dogs also get too close and sniff at their reflection because they are interested. But this rarely happens.

Dogs have no sense of self, so they don’t recognize themselves in the mirror.

Check out what you should do if your dog keeps staring at the mirror.

How Do I Clean My Dog’s Eyes?

Cleaning your dog’s eye is vital to avoid irritation and discomfort.

To do this, you need to use a clean, soft washcloth and wet it at room temperature.

Then gently stroke the sides of your dog’s eyes without touching the eye itself.

Avoid using paper towels, wipes, soaps, or shampoos when cleaning your dog’s eyes. Seek the advice of your vet if your dog has tear stains that are hard to remove.

Cleaning your dog’s eyes is part of grooming your dog at home. It also involves cleaning their ears, bathing them, trimming their nails, and more!

If your dog winks a lot, it may simply be because they want some attention and love. Sometimes, it’s just because they are happy without needing anything.

Embrace and encourage their behavior! It’s adorable and harmless, so there’s nothing to worry about.

Dogs are really our best friends and an integral part of our families.

Keep your dog happy and healthy all the time because it is your responsibility as a good dog owner to take care of them.